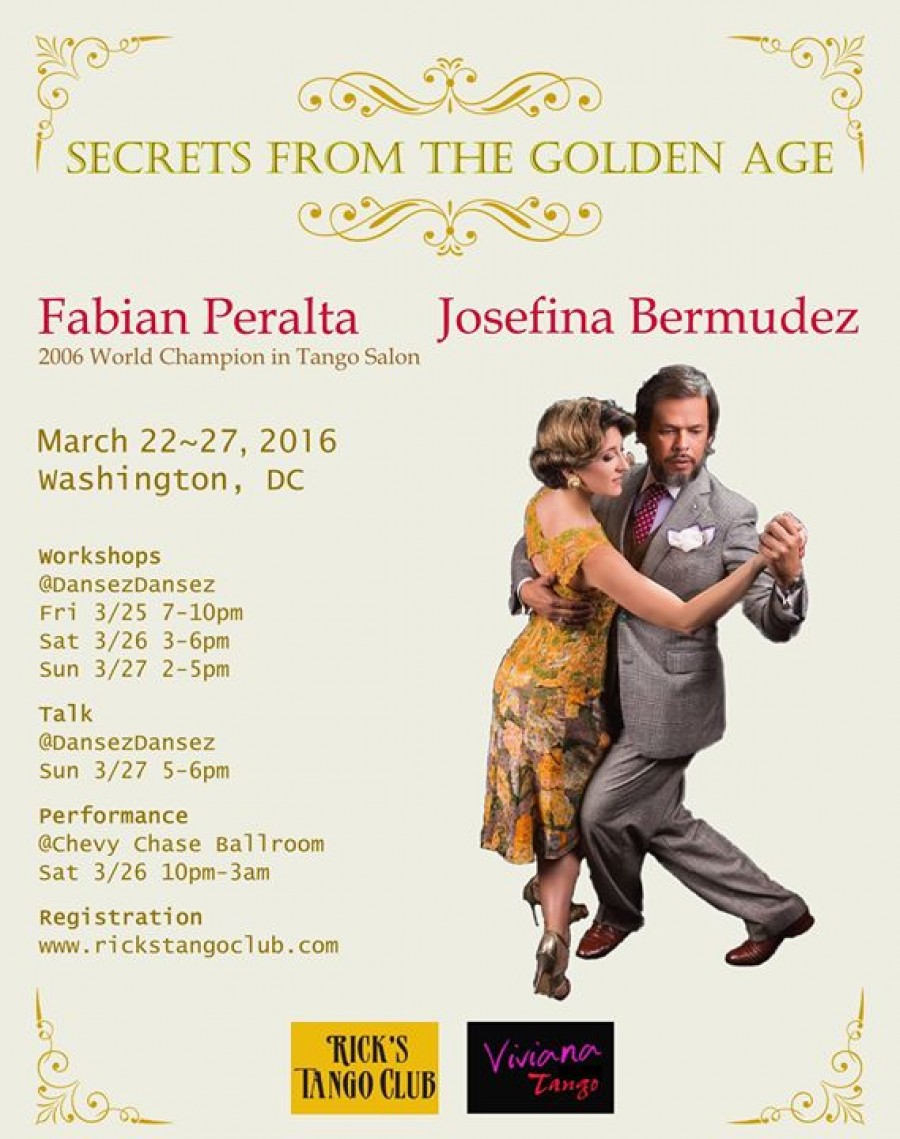 We would like to explain why "Secrets from the Golden Age": this goes back to their tango history. Fabian started learning Argentine folkloric dance at the age of 6. Then, he was trained in ballet, and aspired to become a professional ballet dancer. When he came to Buenos Aires to work as a ballet dancer, he accidentally stumbled upon tango, via a show by Miguel Angel Zotto and Milena Plebs, at which moment he decided to pursue tango as his career. Since he went from other dances to tango (for clarity, Fabian says that his early ballet training worked against his learning tango), this circumstance drove him to have the desire to find the root of tango. This search for the root of tango brought him to be in contact with the great Milongas (according to Fabian, "Milonga" is the way the most distinguished dancers were called in the Golden Age) from the Golden Age who were still alive at that time, and he could acquire much knowledge (and the "secrets" that Fabian and Josefina will transmit in their workshops during their visit to DC this time) of how great Golden Age dancers danced. Then, we won the world tango championship in 2006. He says that there is nothing much he has added to the technique from the Golden Age, but he did develop and evolve the methodology for teaching it. Josefina also started with ballet at the age of 8 and began to learn tango at 11, and then fully commited to tango later. The greatest influence on her tango dancing was Fabian, and they share the same passion and desire for evolving and transmitting the tango dancing from the Golden Age.

During their visit, there will be 6 workshops. We designed their workshops carefully so that the topics will be progressive, from the very fundamentals of their technique, how they do what they do, based on the technique from the peak of the Golden Age, to the details and know-hows of how legendary Milongas did what they did, including their tricks and steps. Below are the workshop topics (workshop level in parentheses).

* Milongas: according to Fabian, "Milonga" is the way the most distinguished dancers were called in the Golden Age.

Friday:
- W1. Embrace and connection: more than 7 types of embrace (all)
- W2. Yeites: details and tricks of legendary Milongas (int/adv)

More detailed explanation on each topic will be released soon.

~* Talk Session on Milonga Culture *~
Fabian and Josefina teach milonga culture and codigos (etiquette and rules of milongas) regularly, so we asked them to have an 1-hour talk session on the topic during their visit and they agreed.

The aim of this talk session is to understand not just what and how about codigos, but also why, the practical reasons why certain rules and etiquettes became to exist.

Fabian and Josefina will explain and answer your questions, based on their experience with the people who danced in the Golden Age as well as their own.

The talk session will follow the Saturday workshops in the same venue, and there will be no attendance size limit on it. A separate event page will be set up shortly. Stay tuned!

The location of all workshops is DansezDansez, 4907 Rugby Ave, Bethesda, MD 20814. The performance will be at the Chevy Chase Ballroom, 5207 Wisconsin Ave, Washington, DC 20015. Their private lessons will be done at Viviana and Isidoro's house in Montgomery Village, MD.

- 20th Anniversary Milonga Portenia with performance of Fabian and Josefina
$18

All the workshops will be gender-balanced and capped to ensure good learning environment.

We hope that many will take advantage of this learning opportunity!