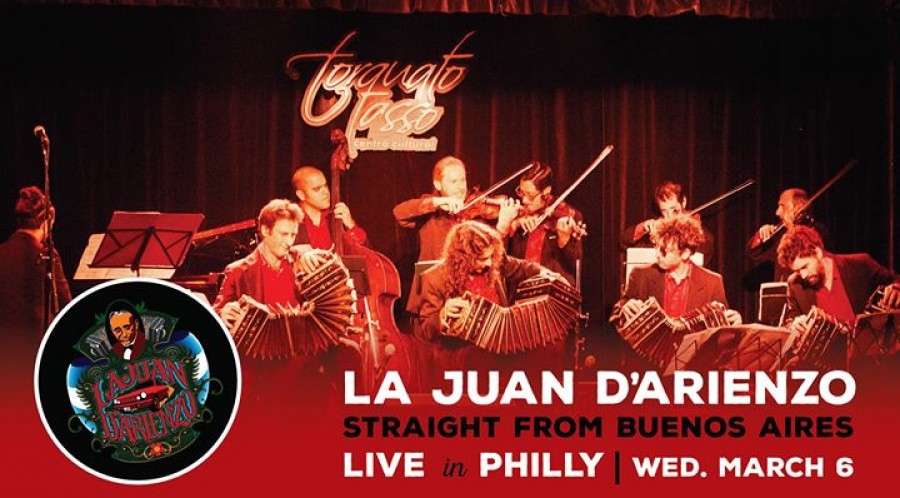 One of the most popular, most danceable, and highest-level tango orchestras in the world, Orquesta Tipica La Juan D'Arienzo has been steadily acquiring devotees since its founding in 2012. The orchestra enjoys a direct link to the best of tango history: the lead bandoneon and orchestra leader is Facundo Lazzari, whose grandfather was Carlos Lazzari. Carlos was the first bandoneónist and arranger for the original Juan D’Arienzo Orchestra from 1950 until 1976, when D’Arienzo passed away, and then the leader of Los Solistas de D’Arienzo.

After less than a year in existence, La Juan D'Arienzo was already playing as part of the Buenos Aires Tango Festival and touring throughout Argentina. Since 2014, the band has completed extensive tours in Europe. In 2015, they played 35 shows in Asia, as well as performing in 27 cities in Europe. Each year, the orchestra's profile rises, but they have not yet performed in the United States.

We are HONORED and THRILLED to present La Juan D'Arienzo in Philly as part of their first U.S./Canada tour.

6:30-7:15 pm: Interview with the members of La Juan D’Arienzo for #TangoStories for broadcast on USALA Radio.

Note: We will need A LOT of volunteers to help out with HOUSING and TRANSPORTING all of the musicians (between Wednesday, March 6 and Thursday, March 7 only). Please message Meredith Klein if you can help!